I realize that I may be a little late to the party since all the buzz about this documentary occurred last year. But I finally got around to watching it and I’m glad I did. The personal story made me feel very invested in their discoveries. I will say that it is not a cheery film, but that seems to be impossible when talking about the massive coral die-offs in the last twenty years. Coral bleaching has been in the news recently. Unfortunately, in 2017, the year after the filming, there was another massive bleaching event on the Great Barrier Reef. This is an article about it from the Yale School of Forestry and Environmental Studies: Yale Environment 360. 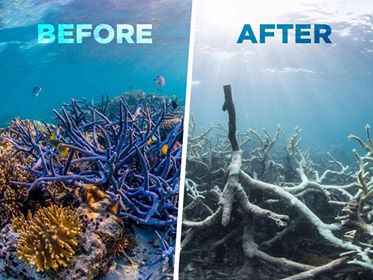 I did learn some things from the documentary. I learned how bad the bleaching in Florida is. That somehow hasn’t really made it into the news. And my mother, who watched it with me, learned a lot about coral itself. (I happen to have studied coral as an intern at the New England Aquarium.)

Finally, there were some important points made that I’m going to make here as well. Corals are like the trees in a forest (such a great analogy!). When they die, they take away an entire ecosystem. The fish and turtles and sharks leave too. Reefs are nurseries for a lot of fish, so even those fish species who don’t live there might have trouble without a place for their young to grow up. Coral reefs also protect shores from storm surge, so protecting them helps humans as well.

Coral reefs are some of the most beautiful places on Earth and according to the recent IMAX movie The Last Reef they may be gone within our lifetime.  It starts by talking about the amazing variety of species that live in coral reefs, from coral to fish to sea slugs.  Sea slugs, or nudibranchia, look a lot like land slugs, but come in a tremendous variety of beautiful coloring.  The Last Reef  also talked about how many of these animals live in symbiosis and depend on each other for survival.  An example of this is the relationship between coral anemones and clown fish.  Anemones are poisonous to most fish and so the clown fish live within them to stay safe.  The clown fish defend the anemone and keep it clean.  The biodiversity and relationships between all the different living organisms is phenomenal.

The second half of the film talks more about what is threatening coral reefs.  One of their major points is about the amount of CO2 in the ocean and how as it increases so does the acidity of the oceans.  People with fishtanks have to make sure the pH remains within certain levels and the ocean is no different.  There is also the rise in ocean water temperature which often results in coral bleaching.  Coral bleaching is caused when the symbiotic relationship between coral and algae is disrupted, often by water temperatures above what the coral is used to.

According to the movie, coral reefs are disappearing five times faster than rainforests.  The effects are being felt on shores that have been protected from the ocean by reefs, and by the entire ocean population.  I would like to say that the end of the movie felt alarmist, but unfortunately they are right and I hope that more will be done to save coral reefs.

I watched the movie at the Museum of Science, Boston.