I love shrimp.  In fact, I love seafood.  I’m very aware of the scarcity of cod in the Northeast U.S.  But I wasn’t aware until recently of the devastation that shrimp farming causes.  It has caused me to pause a little before ordering shrimp.  I read a book on mangroves, which turns out to be all about shrimp.  It’s called Let Them Eat Shrimp: The Tragic Disappearance of the Rainforests of the Sea by Kenneth Warne.  He is a reporter and it tells of his journey to various places all over the globe that have mangrove forests.  It’s beautiful (and kind of sad) that all of the places are facing essentially the same problems, whether they’re in India or South America.  Shrimp farms destroy the mangrove ecosystem while bringing no replacement benefit to the local communities who depend on it.  I was really glad to hear about that these communities who find food, and materials for building and making fire, and essentially live on the mangrove forests still exist.  I hope that all the efforts described in this book are able to save those communities.  Shrimp farms seem like capitalism run amok.  They take one product, shrimp, and make as much of it as possible in order to make as big a profit as possible, for the one company that owns the farm.  They don’t care about the local people, or the local ecosystem. 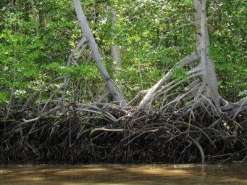 Mangroves are important, more important than I realized.  They are a carbon sink – they capture carbon that otherwise would be released into the air and increase global warming.  They protect shorelines from storms.  They give safe harbor to different kinds of baby fish as well as a vast number of species including birds and mollusks.  Their nutrients feed off-shore reefs.  If you’re not interested in the science of ecology, local ecosystems (including the human component) or mangroves, this book may not be for you.  But it confirmed for me how fascinating and important I think all of this is.

Here is more reading (from the websites where I found the pictures), if you’re interested:  Mangroves in Ecuador and Mangrove Hub